Reprinted for the Spring of 2018 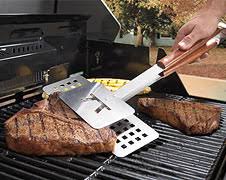 This is a tribute to community. Now, normally when you think about a bunch of guys hanging around the garage BBQ watching the hockey game, images of beer swilling, aluminum can crushing, hard talking and loud cheering goons come to mind. But this bunch of guys are a little different. Oh sure, there’s some of the above, but this group has turned the garage BBQ gathering into a work of art.

In order to protect the innocent, I will only refer to them as Brodie’s Boys. When the weather permits, they open up the garage to reveal their “man cave” complete with couches, chairs, coolers and a honkin’ big screen TV. You’ll also find a smoker, a collection of large cooking pots, and a wide variety of utensils. On just about ever weekend from the spring to the first snows, they’ll be out there cooking up a gourmet meal that could feed an army.

The laughter and the aroma of good cooking first caught my attention when I was walking the dog one day. “Come on in, Skid!” they called. Like Ulysses getting lured by the Sirens, I couldn’t resist. I think that first meal involved venison sausages and pepperettes. In tomato season the pasta sauces were being cooked. On another day, they had one of their super large pots filled to overflowing with mussels. And not only do they love to cook up delicious meals, especially if it’s fresh, in season produce, they love to share.

Neighbours walking by the house are invited for a taste, a meal, a little of whatever sport is being played (sorry guys, I’m boycotting Russia’s annexation of the World Cup) and some good neighbourhood conversation. Being a journalist, I solemnly swore an oath that whatever is said in the Brodie Boys BBQ garage, stays in the garage. In order to keep the crowds down, the address is only recorded in symbols in the Caledon Book of Secrets. Revealing it would result in the same excommunication that John Wick received at the end of Part 2, so it is safe with the boys in the hood.

However, if you are in Bolton one weekend, and you happen to catch the wafting of gourmet backyard BBQ cooking being carried on waves of laughter and community chatter, it just might be Brodie’s Boys cooking up another neighbourhood feast,