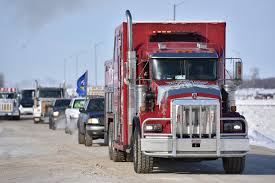 When the Yellow Vest Convoy rolled across Canada under the disguise of protesting an atmosphere saving price on carbon, every sane citizen in the country should have thrown their bodies across the highways to block the trucks. This climate change denying, xenophobic parade of pollution spewing  fossil fools should have been turned back to sink in the tar sands.

Instead, they will idle their trucks for a few days in the nation’s capital, get their undeserved CBC talking heads exposure, sensational front page headlines in the Sun for a few days, and two thumbs up from Andrew Scheer as he bottom feeds for votes.

Yes, wearing their true blue MAGA (Make Alberta Great Again) caps, the “United We Roll” mob will stomp and puff out their chests and chant until the diesel fuel runs out, at which point most of the audience will have passed away from toxic fumes. Just mention the words “Liberal and National Energy Program” in the same breath to a pre-Paleolithic Albertan, and you will spawn a Convoy.

Now, keep in mind that some of my favourite memories and old friends are from Alberta, and probably much of the fossil fuel I burned for years driving around the country. That was then and this is now. Alberta can’t hold the country hostage for wasting the legacy that Peter Lougheed saved up in the Heritage Fund.

Also keep in mind that the Yellow Vest organizers acknowledge that there were more than Albertans in the United We Roll Convoy as confirmed by Ontario’s Sault Ste. Marie  Yellow Vest organizer who referred to Canada’s immigration Minister as an “ugly n*****” responsible for flooding Canada with useless n***** muslim terrorists.” You get known by the company you keep, good truckers everywhere.

Nor does anyone deny that Alberta should be resurrected as an energy giant in Canada, If half the “energy” that the organizers put into this convoy went into transforming the oil extraction and pipeline sector into high tech renewables, the problem would be solved. Like when the blacksmith’s shops became mechanics garages that became computer analysis workstations. Change is inevitable.

However, the resistance to this change requiring job retraining and infrastructure transformation is at least more palatable than the white nationalist and white supremacist core of the Yellow Vest Convoy. Yellow Vests Canada bears little resemblance to the movement that started in France to protest growing fuel prices. In Canada, the Great White North, its goal is to quell immigration, not sign the United Nations’ migration pact, and stop carbon taxes and a sustainable development agenda.

In other words it is racist, environmentally illiterate, and dangerous.