On the evening of December 7, 2017, I had the honour of interviewing Mr. Nabil Marouf, the official representative of the Palestinian Delegation in Canada. Now, had the League of Nations and the United Nations followed through on their promises to the people of Palestine following World Wars One and Two, it would have been a different interview. I would have been speaking to the Ambassador from Palestine in his office at the Palestinian Embassy in Ottawa. But as our Canadian First Peoples know all too well, the promises of colonial powers are often ephemeral.

When I spoke with Mr. Marouf in Ottawa, he was absolutely clear in Palestinian condemnation of the unilateral decision by the Trump administration to declare Jerusalem the Capital of Israel, and to announce that the American embassy would be moved from Tel Aviv to Jerusalem.

“This is a clear violation of International Law,” Mr. Marouf stated, referring to the United Nations Declaration 181 that has proclaimed Jerusalem an Internationalized City.

He was absolutely correct. In fact, at the end of World War One, the League of Nations, the precursor to the modern UN, had passed Article 22, that declared Jerusalem to be the capital of Palestine. However, global colonial guilt over the Nazi genocide of the Jewish people, and the refusal of good Christian nations to take shiploads of Jewish refugees into their ports, resulted in a different outcome.

When ethnic cleansing by Jewish terrorist organizations in 1948 drove 10,000 Palestinians out of their homelands, the new UN declared them to be “refugees” and not a “people” This is why the word “complicit” is the word of the year.

My first question to Mr. Marouf was on his reaction to the Pronouncement of the Canadian government, from Prime Minister Trudeau and Minister of Foreign Affairs, Chrystia Freeland: ‘‘Canada is a steadfast ally and friend of Israel and friend to the Palestinian people. Canada’s longstanding position is that the status of Jerusalem can be resolved only as part of a general settlement of the Palestinian-Israeli dispute.

‘‘We are strongly committed to the goal of a comprehensive, just and lasting peace in the Middle East, including the creation of a Palestinian state living side-by-side in peace and security with Israel. We call for calm and continue to support the building of conditions necessary for the parties to find a solution.’’

Mr. Marouf’s response was unequivocal, “We deeply appreciate the support of Prime Minister Trudeau and the Government of Canada as expressed in the statement by Minister Freeland.” He felt that Canada had a clearer understanding of the historic roots of the conflict, with East Jerusalem being the Holy City of Palestine and many of the world’s religions, and West Jerusalem being under Israeli control.

The annexation and illegal occupation since 1967 of East Jerusalem by Israeli forces has been condemned by the United Nations and the international community. Despite UN Resolution 242 calling for the withdrawal of occupying forces, Israel seems committed to defying International Law and the pursuit of a just peace, and to the slow extermination of the Palestinian people.

When I asked how the Trump decision was going affect an already volatile situation in the Middle East, Mr. Marouf was passionately clear: “This decision has created a unified rage in the Arab world. East Jerusalem contains the Old City with the Temple Mount (the Haram esh-Sharif), the Western Wall, the Al-Aqsa Mosque, the Dome of the Rock and Church of the Holy Sepulchre. These are some of the holiest sites of Judaism and Christianity and Islam.”

He hesitated a moment, and then concluded quietly. “This decision goes to the heart of my people.”

To the heart and through the heart. After our interview, we agreed to meet again in Toronto to review what the coming weeks would bring.

I write this with the distinct feeling that President Trump has no idea what he has unleashed, but peace in the Middle East will not be one of the outcomes. I tried to place myself on the prayer mat of a devout Muslim, in the shoes of a father living in the Gaza strip. How would I view this arrogant, unilateral decision by the enabling power of my occupiers?

“Cry havoc, and let slip the dogs of war!” or “Give Peace a Chance.” 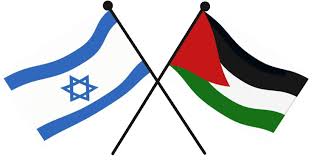 1 thought on “Jerusalem and Palestine, Israel and Trump”