The latest NASA Climate briefing contained the usual news about ocean warming, and sea level rise, and Arctic sea ice reduction, and polar vortex surges and more violent storms expected. But tucked away in all of this good news was an item that bothered me the most. 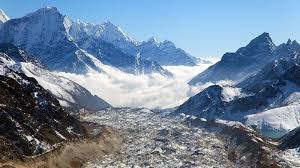 The Himalayan glaciers are disappearing at an increasing rate and expected to be gone by the end of the century. This is the tallest mountain range on the planet, the child of a great tectonic plate shift eons ago. The fresh water that flows off these glaciers doesn’t just inspire National Geographic calendars and yuppie expeditions.

To quote from the National Academy of Sciences Atmospheric Sciences and Climate Board: “The Hindu-Kush Himalayan region extends over 2,000 km across South Asia and includes all or parts of Afghanistan, Bangladesh, Bhutan, China, India, Nepal, and Pakistan. The region is the source of many of Asia’s major rivers, including the Indus, Ganges and Brahmaputra.”

Beyond concerns for planetary ecology, those waters and rivers replenish wells and irrigation systems for millions of people.

Teachers: here’s a good math lesson for your class. How many people live in those countries? Or a health question: What are the four basic needs of life? Or a geography/history question: What caused the collapse of the Fertile Crescent civilizations, the French Revolution, the Arab Spring uprisings, and the Syrian civil war?

You don’t have to be a rocket scientist to calculate the social upheaval caused by millions of  hungry environmental refugees seeking water, food, shelter, and empathy on the remaining high dry lands of our Home Planet.

Add into this mix the news that 2018 was the fourth hottest year on record, and all five of the hottest years have occurred in the last five years. Stir in the United Nations Annual Food Security report that chronic hunger continues to be on the rise for millions of the world’s population. The conclusion is that if we exceed a 2ºC rise in global temperature, accelerating climate change will push us to a point of overshoot. In biological terms that means a whole lot of people are going to die from famine and the social chaos that follows.

The far religious right loves this scenario. Taking the world into Armageddon will only hasten the Second Coming and won’t The Rapture be delightful. However, speaking for all of the billions and billions of organisms on the Planet not enrolled in organized apocryphal religions, I’d rather not take the chance. We’ve been through serious mass extinctions before and the road to recovery is long and hard.

We have had all the information we needed to act wisely and well way from back in June of 1988 when the World Meteorological Organization announced: “Humanity is conducting an unintended, uncontrolled, globally pervasive experiment on the atmosphere of Earth whose ultimate consequences could be second only to a global nuclear war.” Yes, my friends, that was the conclusion of the Our Changing Atmosphere Conference in Toronto focused on global security thirty years ago.

Now, my friends, we have Doug Ford dumbing us down with his populist slogan about the “Job-Killing Carbon Tax.” As the humourous take on the lawn sign says, “Beware of Doug!” Putting a price on carbon is an absolute necessity. And strong environmental regulations. And a Polluter Pay Principle. Short term pain for seven generations gain.

I wrote several years ago that Earth is telling us, “You can pay me now, or you can pay me later.” When the bill comes, it won’t matter what our religious belief systems are. The Planet is agnostic and operates on the very simple rules of geography and ecology.

And you don’t have to take my word for it. I am just a citizen scientist and journalist. But the good people at NASA (the National Aeronautics and Space Administration), NOAA (the National Oceanic and Atmospheric Administration), the WMO (the World Meteorological Organization) and the IPCC (the UN’s Intergovernmental Panel on Climate Change) seem to know what they are talking about. Or you can trust Doug Ford and Jason Kenney and Andrew Scheer and Donald Trump.