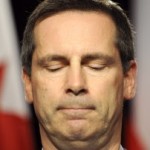 I know it looks more like a sport's headline, but I couldn't resist. As the Ontario by-election voters went to the polls today in Vaughan and Kitchener-Waterloo, I kept thinking of all the reasons why Dalton McGuinty should get a resounding humiliation for a long list of broken promises, manipulations, and downright dirty politics.

The first that comes to mind is the Ontario Health surcharge that rears its ugly head every year at tax time – the campaign that brought McGuinty to power promised never to do that, and then did.

Secondly, economic downturn aside, Ontario's deficit is ballooning, and still he refuses to really raise the taxes on corporations and the very rich, and close their evasive loopholes.

Third, he has never accounted for the "secret law" that lead to the confusion with police security over the G20 riots and arrests. This was Ontario's version of the "War Measures Act" without any appropriate debate or public disclosure. The result: a debacle of civil rights abuses and embarassment to our police force that could have easily been prevented had McGuinty (and Harper) done their jobs with transparent due diligence.

Fourth, his failure to appear at the at the all-party committee probing the ORNGE scandal despite two requests to do so. Arrogance and ignorance are not appealing in a leader – just ask the Mayor of Toronto.

Fifth, the $190 million cancellation of the contract to complete the Mississauga power plant, in a desperate attempt to save four Liberal seats and a majority government.

Finally, his "Putting Students First" bill, which should more appropriately be labelled, "Putting Politics First" in order to win two by-elections and gain a majority. Mr. McGuinty, it is irresponsible in the extreme to target one segment of the public employees with the responsibility of paying for your mistakes, and all-day kindergarten, senior and junior (there is not a single public school kindergarten classroom in Ontario that looks anything like the glowing ad on TV), is a big mistake costing millions. Given that the teachers were still negotiating with their Boards, that their Boards were quite content with the negotiations process, and that no strikes had been called for anywhere in Ontario, the Bill is also unconstitutional, and a violation of historic collective bargaining rights and responsibilities.

You want a freeze, Mr. McGuinty? Then freeze everything – every salary for every MPP, CEO, public and private, every worker – freeze the food, housing, gas, oil, clothing, and insurance prices. But don't you dare freeze the salaries of one group of hard-working tax paying Ontarians because of your inablity to balance the books.

You deserve a defeat Mr. McGuinty. A clear minority might bring you a little humility, more honesty, and better policies. We're coming for you.