I watched our Prime Minister’s year end interview with Peter Mansbridge on CBC news the other night and was shocked. First, was Harper’s quote from his first overseas trip to Berlin for the G8: “Climate change is perhaps the biggest threat to confront the future of humanity today.” Wow – was this the same Stephen Harper who had declared climate change to be a socialist plot? 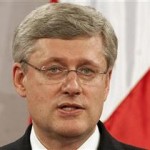 And then came the equally astonishing quote: “We owe it to future generations, we as Canada. When you’re linking climate change to greenhouse gas emissions, we owe it to future generations to do whatever we can to address this world problem. We should make a substantial contribution to confronting this challenge. Talking the talk doesn’t work anymore. It’s time to walk the walk.” Another Wow – was this the same Stephen Harper who had led Canada to yearly “Fossil of the Year” awards for having no policies to deal with accelerating climate change?

As he stumbled through his explanations of those quotes, I wondered how it was possible for a public figure to lie so publicly without any apparent shame. He claimed all GHG reduction benefits from closing coal fired power plants as if that was a federal initiative, and not Ontario’s provincial policy. He forgot to mention that any reductions from Ontario’s initiative were offset by rapidly rising GHG emissions from the oil industry in Alberta.

It’s really all about power: political power and energy power and how to keep the myth alive. Whether it is pipelines from Alberta or plutonium in Ontario, our politicians will do their best to spin the story to their advantage. While Ontarian’s did very well to phase out coal fired electricity plants, they would be wise to keep a close eye on the first private plutonium ownership known as Bruce Nuclear. Its cosy relationship with the Ontario Energy Board does not bode well when the CEO of Bruce recommends that his private corporation take over control of all of Ontario’s nuclear production.

It’s also still worth keeping a close eye on McGuinty’s legacy with the gas plant scandal. Anytime a politico has all the hard drives wiped clean, you know something is rotten in the riding. Here was a case when a good energy power idea – clean electrical production – lost out to the political power incentive.

We constantly have to contend with the constant pipelines pitch – whether it be Enbridge or Trans-Canada, the ads are all about how good, green, and clean the transportation of tar sands oil and fracked gas will be for the environment, our children, and, of course, the economy. Brought to you by the Canadian Association of Petroleum Producers. If you don’t like our ads, we will have the Canadian Revenue Agency audit your local environmental defence charity. Another Wow!

Now, all of us have to admit that we love oil. It’s in our clothes, our bread bag tabs, our plastic water bottles, and anyone who drives a car needs oil. It needs to get to us somehow, so we have a choice of pipelines, rail cars, transport trucks, and tanker ships. The question is not whether we need oil in our current energy mix until we wean ourselves to something more sustainable. We need oil. Period.

What we also need are federal and provincial policies that ensure that the production and transportion of that resource are done in the safest, most environmentally responsible ways possible. We also need policies that encourage the development of alternative energy sources on a level playing field by ending the ridiculous subsidies now being given to Big Oil and by imposing meaningful royalties on a finite resource.

Does this mean that Canadians should consider a National Energy Policy? Of course! And all necessary provincial ministers should be sitting down with the federal government to come to consensus on how to plan for the present of our seniors and the future of our children. Does this mean Canada will institute a Carbon Tax? Guaranteed!

It was at this point in the Mansbridge interview that Stephen Harper lost it. He just couldn’t bring himself to say, “Carbon tax.” Heaven forbid that he acknowledge that Stephane Dion was right all along. Harper tried to present it as a “levy” as per the Alberta tech fund, a provincial and not a federal initiative, by the way, that “taxes” GHGs at a nominal rate and invests it in alternative energy research.

Sadly, Our Government’s leader couldn’t even get out the word “levy” easily, finally settling on “pricing” carbon. We can play with tax, levy, price, and other words to pay for our excessive production of carbon dioxide and methane, but it all means the same thing. The planet is saying, “You can pay me now, or you can pay me later, but you will pay.”

When asked if he thought climate change was still the biggest threat to humanity, Harper added the economy and radicalized extremists to the list. He still can’t see the difference between a planetary issue affecting all life on earth and the petty squabbles of power hungry humans.

We will all pay for that lack of vision.