Yes,  “shocking and confusing” was how Ontario’s reopening plan was described by Ontario Hospital Association CEO Anthony Dale on February 12, 2021. He added that the move is a “huge gamble” given the scientific modelling presented the day before that predicted a “third wave” of infections driven by the new virus variants . 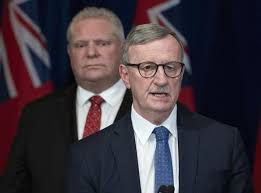 The plan was cleverly released by Premier Doug Ford and Doctor David Williams, Ontario’s Chief Medical Officer, on the Friday before the long Family Day weekend. Both Ford and Williams were harshly criticized by Ontario’s Auditor General Bonnie Lysak in her AG’s report last year. That report stated that Dr. David Williams “did not fully exercise his powers under the Health Protections and Promotions Act, did not issue directives to local medical officers of health to ensure a consistent response, and did not issue directives on their behalf to Ontarians.”

In short, the doctor who was scheduled to retire from his post as Interim Medical Officer of Health last February simply “did not lead” the province’s response to COVID-19. Yet Premier Ford keeps him on the government’s so-called “Science Advisory Board” where today he is backing Ford’s “shocking and confusing” reopening plan. It begins to appear that Dr. Williams is a bit of a “Yes Man” for Ford’s Ontario is Open for Business mantra.

Follow the money, Ontarians. The “Science Advisory Board” is a front that looks like Pandemic Health Protection for the “good people of Ontario”  but acts like Ford’s own Chamber of Commerce. Shocking and confusing, and dangerous to our health.