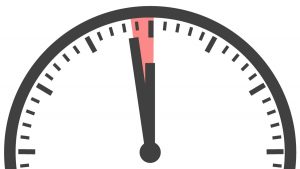 In 1945, Albert Einstein and fellow scientists at the University of Chicago created the Bulletin of Atomic Scientists. The cover of the first Bulletin published in 1947 featured a design by graphic artist Martyl Langsdorf and the Doomsday Clock was born. In 1947 the Clock was set to seven minutes before midnight.

One year ago, the Bulletin of the Atomic Scientists published this warning:

“To: Leaders and citizens of the world

Re: This is your COVID wake-up call: It is 100 seconds to midnight

Humanity continues to suffer as the COVID-19 pandemic spreads around the world. In 2020 alone, this novel disease killed 1.7 million people and sickened at least 70 million more. The pandemic revealed just how unprepared and unwilling countries and the international system are to handle global emergencies properly. In this time of genuine crisis, governments too often abdicated responsibility, ignored scientific advice, did not cooperate or communicate effectively, and consequently failed to protect the health and welfare of their citizens.”

The nuclear powers of the world bear responsibility for their stupidity in continuing to develop weapons of mass destruction. At present this includes the United States, Russia, France, China, the United Kingdom, Pakistan, India, Israel, and North Korea. Consider the dangers of nuclear war both on Earth and a few hundred miles above Earth’s surface in our Thermosphere and Exosphere as “developed” nations continue to rattle sabres. Throw in the consumptive greed of industrialized countries as corporate arrogance finances climate change denial. Combine that with the entitled selfishness displayed by the wealthiest nations towards the neediest nations during this recent global pandemic, and it is easy to see why the Doomsday clock has symbolically ticked five minutes closer to midnight in one short decade.

I have written recently about the dangers of ignoring the warning signs. Just like Cinderella at the ball, we are being warned that the party is over when the clock strikes midnight. In 1991, the Doomsday Clock was previously set back 17 minutes to midnight after the collapse of the Soviet Union and the signing of the Strategic Arms Reduction Treaty.

If we are going to reset the clock back for the upcoming decade, then It is time for some significant local and global New Year’s resolutions and long overdue neglected actions, The way I see it.