Yes, Matthew, there is a new leader of the Liberal Party of Canada. And, like your childhood dreams of Santa, he is very much the real thing. I had the pleasure and privilege of working with Justin aboard the MV Lindblad Explorer during a Students on Ice Arctic Expedition in 2005. We were the teachers working with a group of seventy-five international students and a host of scientists and explorers. 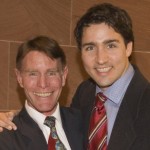 Our job was to prepare the students to give voice to a Youth Declaration on Environmental Citizenship. Our students presented that Declaration at the UN Convention on Biological Diversity (COP 11) in Montreal in December of that year. Their Declaration, thanks to the support of then Environment Minister Stephane Dion, was endorsed enthusiastically by the United Nations delegates from over 150 nations , and tossed into the shredder in 2006 by a newly elected Stephen Harper.

During those two weeks at sea, Justin and I shared many stories of our fathers, their profound influences on our characters,  and our goals in life. I can assure you with complete conviction that Mr. Trudeau believes absolutely in the vision of leadership to which he espouses. He deeply feels that the education he received as a young man growing up at his father’s side, immersed in politics, traveling the world, listening to the conversations between his father and kings, presidents, and prime ministers was a gift given to him, one that he feels he must give back to his country.

Can he win the country? He will have to take Ontario and Quebec to accomplish that goal. And if my riding of Dufferin-Caledon is any bellwether, that will be a challenge. Historically in our riding, if the federal Liberal leader is riding a wave of popular support across the country, a top-notch, well-financed local candidate running a flawless campaign stands a chance of winning. When I was involved in politics here, I was told that you could run a dead cow as the Conservative federal candidate in our riding and it would win by a landslide. I predict that our current Conservative MP will retire to pasture before the federal election of 2015. That will open the slate to an interesting choice for Dufferin-Caledon voters.

Indeed, the next federal election will offer an interesting choice for all voters.  I choose hope.