In 2007, Sidney Lumet directed an intense movie drama titled Before the Devil Knows You're Dead, taken from the ancient Irish toast: "May your glass be ever full, may the roof over your head be always strong, and may you be in heaven half an hour before the devil knows you're dead." 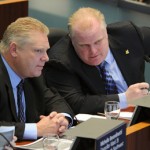 In a nutshell, it is the story of two brothers caught in a web of deceit, betrayal, drugs, and crime that spirals into catastrophe while they pretend that it's business as usual. In the end, their family is torn apart and justice is meted out, not by the long arm of the law, but by the common man. It reminds me of another story of two brothers caught up in a similar web woven from pathological lies and total denial. They keep telling us that everything is fine and it's business as usual. We keep seeing a train wreck tumbling in slow-motion towards the edge of the cliff.

The movie ended tragically, and I expect the reality show will too.