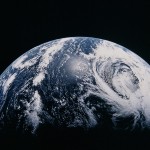 In the Beginning, Man created god.

That's how I began an English lesson in essay writing to support a point of view. The week before I had started with, "In the Beginning, God created man," with no complaints, Little did I know my second statement, based on an age-old rabbinical teaching style of offering opposing points of view to students, would bring in a flood of Biblical proportions from concerned parents who felt I was challenging the faith of their children.

I hold fundamentalist religious beliefs in the same category that I hold the military/industrial/agribusiness/pharmaceutical/energy complex, so I admit to a certain bias. As an English teacher, I celebrate the stories of humanity, creation stories being the most amazing. As a Science teacher, I respect the quests for answers to the deepest questions of who we are, from where did we come, and to what future are we travelling.

In one York University presentation I gave on the State of the World, a student came forward at the break to express her concern that I had only told the Western science perspective and had not told The Creation Story. I reflected on her concerns, and after the break, I apologized to the class, and told my favourite creation story. It featured a great turtle island, an otter, beaver, muskrat and a Great Spirit That Loves Life, and mud carried up in the paws of a creature that would not give up in the quest for life. The class sat mesmerized, and my fundamentalist student was not amused.

"So," I asked the class, "Pick your favourite creation story and celebrate it. It is based on geography and the wonder of human imagination. In the beginning, we were, and still are, the storytellers. If you base your life's direction on a story, choose it carefully."

If there is Intelligent Design, humans need to start applying it.