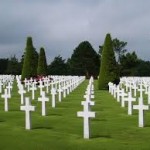 I never want to forget the stories of our parents who fought for our freedom, who lost the innocence of their youth in battles not of their own making, but in defence of something far greater than themselves, following the clarion call of leaders to whom they entrusted their honour. A quiet conversation at a curling game revealed that my teammate had a father who had served in the Juno Beach D-Day landing in 1944; I had a father who was a Hurricane pilot and a POW for 3 1/2 years in the infamous Stalag Luft III prison camp of The Great Escape fame. One story led to another and we slowly resurrected each other's photos and war logs from our parents. I had the privilege this last week of reading of the journey of a father and his son taking part in the 50th Anniversary of the Juno Beach landing on June 6, 1944. The album was filled with wonderful photos of family and friends  sharing a unforgettable trip through history.

But the most moving story of all was his personal reflection when he and his dad visited the graveyard of all of the fallen. He recorded in his journal that he simply couldn't believe the number of white crosses, and the young age that marked their passage. His father had gone one way through the rows, he through another. When they met again, he learned his dad had found the name of a friend from Craigleith, and was too overcome to speak.

We should all be too overcome to speak. But their stories must be told ere, as Wilfred Owen warned us, we must not inflict the great lie upon our children: "Dulce et decorum est pro patria mori." No more will ideolgical fanatics sacrifice the youth of their countries for the good and glory of their ambitions.

So, to honour their stories, what do we do with their war logs, our journals, their stories when we pass on? Who will be the storytellers for our veterans? I do not want my father's or my friend's father's sacrifice to end up in a dumpster, or a government shredder. I want a veteran's library.

There are fewer and fewer left to remember – we pass the torch of their memories – someone, please, hold it high.