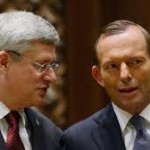 Australian Prime Minister, Tony Abbott, has declared current Canadian Prime Minister Stephen Harper to be "a beacon of light for Conservative leaders in the world", much like George W. Bush and Dick Cheney were for the generation of Conservative leaders before them. Abbott had the unfortunate experience of working with former pre-paleolithic Australian PM Kevin Rudd who obviously distorted his judgement. He even imagines Harper to be a "centre-right" politician. Wow! It takes a big stretch of the imagination to picture our Conservative Reform Alliance Party leader anywhere close to the centre of the Extreme Far Right, let alone the actual Centre of the political spectrum.

Abbott, whose policy direction changes so quickly that he is known as "the weathervane" of climate change discussion in Australia, seems to be a good match for Harper, whose climate change denier credentials are solid among conservative world leaders. Yes, Stephen, you are truly a beacon of light, much like the ones that used to guide ships onto the rocks so they could be plundered by the pirates of their day. And no, Tony, those severe droughts in Australia have absolutely nothing to do with accelerating climate change. Just ask Stephen.