It is the media Anniversary of D-Day, and Juno Beach, and my stomach turns to watch Julian Fantino read platitudes in France while snubbing his veterans and their families back home in Canada. 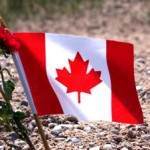 I have heard the stories of Juno Beach and D-Day from veterans, from Steven Spielberg, and from a proud son who visited Juno with his veteran father for the 50th Anniversary. The young who died there did so in the hopes that they were liberating the world from an evil fascism. How horrified they would have been to discover that it would be replaced by a corporate greed dictatorship that served not the peace of the world, but the insatiable appetites of the 1%. A 1% that will use whatever means necessary to maintain their power and privilege.

My father, a WW2 veteran, pilot, and POW camp survivor, made me promise to always exercise my responsibility to vote. I will not abide anything that interfers with that right, whether it be robocalls, buying of candidates, or false advertising by political parties. Any interference in the affairs of an open and honest democratic society is an insult to the honour of those who defended it with all of their youth and innocence. Don’t celebrate D-Day if you can’t walk the talk. As the old wagon masters used to say when a wheel fell off,  “Either get out and push, or get out.”

1 thought on “D-Day, and the Passing of The Torch”