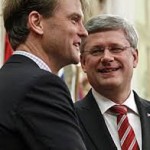 "Our Government" has been strangely silent in responding to the case of Mohamed Fahmy, a reporter who holds dual Egyptian and Canadian citizenship. Fahmy was recently sentenced to seven years in jail for his balanced reporting of Egypt's military crackdown on the democratically elected Muslim Brotherhood. The Egyptian court, infamous for it's mass execution sentencing of protesters, accused Fahmy of "false reporting" and of engaging in terrorist activities by disagreeing with the military government's position.

Now, "Our Government's" silence can be easily explained. First, Fahmy isn't from a major ethnic voting block currently supporting "Our Government". Secondly, Fahmy would bring focus on the more contentious aspects of Bill C-24, the new "Citizenship" Act. He is a perfect example of what would happen to a person holding dual citizenship who has been accused of "terrorist acts", in this case, investigative reporting. If "Our Government" begins to protest too loudly, or "bullhorn diplomacy" as John Baird, an expert in bullhorn dialogue, describes it, it could bring a sharp focus on the more contentious portions of Bill C-24. Under this new 'Citizenship Act", with this "terrorist" conviction, Fahmy could be stripped of his Canadian citizenship. 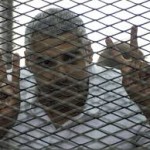 In this case, "Our Government's" silence gives consent to the Egyptian sentence, a sentence most unjust and worthy of a very loud bullhorn protest. While Paul Callandra, speaking for the silent Prime Minister, may be concerned about insulting the new military backed government in Egypt, the rest of the civilized world is not. It is time for Canada to regain it's place on the world stage as an outspoken and fearless defender of human rights, social justice and the rule of international law. It is time for "Our Government" to be changed. We don't need this silence; we need a new voice, loud and clear.