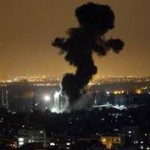 Rising over Palestine is the djinni of war. A vengeful djinni unleashed by the State of Israel and the occupied Territory of Palestine, specifically the Palestinian Gaza Strip. While Israel justly claims the right to self-defense, the Palestinians justly claim that Israel get out of their lands, stop their blockades, and dismantle and stop building illegal settlements for Jewish settlers on lands that belong to Palestine in the West Bank, East Jerusalem, and the Golan Heights.

A simple request, really, from Palestine and the democratically elected Hamas: Stop violating International law, and we will stop launching rockets into Israel. Now, almost every country of standing has asked for a ceasefire and a diplomatic solution to bring peace to this Goliath and David battle. On the one side is the first rogue nuclear country in the Middle East with a formidable army, air force, and nuclear arsenal; on the other side sticks and stones, and a few clandestine rockets. It is no longer an eye for an eye. One Israeli eye is worth a hundred Palestinian eyes. And counting.

In Canada, if you are attacked, you are legally entitled to defend yourself with appropriate response to the level of the attack. You are not allowed to continue to punish, subdue, injure, permanently disable, or kill your attacker. Nor are you allowed to retaliate against your attacker's family, neighbours, or neighbourhood. However, on the international stage, our current Prime Minister has violated this basic premise of Canadian justice. He has declared unequivical support for Israei's attacks on Palestine, and complete condemnation of Hamas. His pit bull "diplomacy" mouthpiece, John Baird, amplifies that message over the international media.

While the international Court of Justice, The United Nations General Assembly, and The United Nations Security Council all declare Israel to be an "Occupying Power" in violation of international law, Harper et al, on their way to more honorary degrees, condemn the UN and the U.S.A. for criticizing Israel and for attempting to negotiate a ceasefire. This confirms "Our Government's" current disdain for the rule of law, fitting in perfectly with their attacks on the Supreme Court of Canada, Elections Canada, and any other institution that disagrees with their far-right conservative myopic perspective.

This position has little to do with securing a lasting peace in the Middle East. This position is all about securing the Canadian Jewish vote in 2015. While the NDP and the Liberals and the Greens talk middle ground consensus, daring to hint that perhaps the Palestinian voice should be heard, the Conservative Reform Alliance Party trumpets a one state solution where the best armed winner takes all. And maybe one more CRAP majority government in Canada.