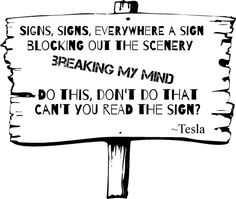 We have heard about plastic bag bans, and plastic straw bans, and micro-bead plastic bans. Now, in this year of provincial and municipal elections, I am proposing a ban a plastic sleeve advertising signs.

We expect them from our political candidates to encourage us to get off our duffs and vote. But in an election spring you would think that small businesses would back off just a little with their insidious median plastic sleeve sign advertising.

My proposal is that during the four year election cycle, no other signs get median posted. Better still, I propose a total boycott of any small business that dares to sign pollute a neighbourhood. Likewise, I propose a boycott on any garage sale that sticks their signs on STOP signs and traffic light standards. In Mississauga, residents can get permission from the City to remove “nuisance signs” from medians and traffic light poles. Election signs and private property signs are, of course, exempt.

Enough of this sign pollution in Caledon. Councillors, pick up the sword of justice in your hands and smite down this intrusive plastic pollution. Small businesses, take out an irritating front page fold-over ad in one of our local weekly newspapers and support print press. Until we get a nuisance signs by-law, the Forgiveness Principle is in effect.

And in the meantime, and as Clint Eastwood so eloquently growled in Gran Torino, “Get off of my lawn!”