Written for The King Weekly Sentinel as The Cedar Glen Story

Once upon a time there was a conference centre in King Township owned by the United Church of Canada. It sat high on the tablelands above the Humber River with a substantial conference centre and the largest western red cedar pan abode building in North America. Those buildings housed the guest rooms for visitors, whether on a religious retreat, a conference, or a school outdoor education visit. It was simply called Cedar Glen.

For many years the North York Board of Education utilized the magnificent property and buildings as their first Outdoor Education Centre with a long term contract running from September to June every year. When that contract finally ended, the outdoor centre moved to the Bolton Camp for several years until Mono Cliffs Outdoor Education Centre north of Orangeville was built. The United Church, faced with declining revenues, wisely sold the site to the YMCA and gave Cedar Glen a whole new lease on life.

I had worked at Cedar Glen through North York Outdoor Education in the 70’s and 80’s, and later with Ontario Nature after it was sold to the YMCA. I thought I knew the site pretty well. But nothing prepared me for what I witnessed on a tour with Mayor Steve Pellegrini and King’s Sustainability Committee on June 1, 2018. Oh, it was the same property alright, but the transformation was astonishing.

The YMCA has brought Cedar Glen into the 21st century with a touch of ecological class. Cedar Glen was a diamond in the rough back in the 70’s – today it is a sparkling gemstone. The tour by site manager Brandon McClounie was engaging and unscripted – he knew this site and its history inside out. Without missing a beat on our tour by electric golf cart – and I have to give a call out here to Amy, YMCA staffer, who is the BEST GOLF CART DRIVER EVER – he covered every detail of the sites past, present and future..

The tour covered: The Cedar Glen year-round outdoor education programs where ten or more can book a day or multi-night visit. The YMCA provides staff for facilitated programs like high ropes, low ropes, mountain biking, archery, and outdoor skills as well as leadership and team building workshops. In addition, the summer day program is the largest in the GTA welcoming over 400 children each day during the summer from both the GTA and local communities.

Programs can go from one to two weeks with a full range of camp programs including their special Farm Camp. They can offer this because Cedar Glen is home to a large organic farm now in its sixth year of operations. They produce certified organic produce that is served in their kitchens and sold locally at Farmer’s Markets. Last year they produced two tonnes of produce. To sweeten the deal, they also have an apiary on site, and produce their own maple syrup in the spring. 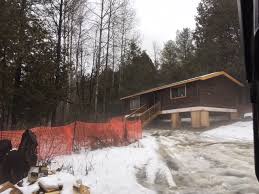 The most surprising thing for me on the tour was to come across two reconstructed cabins from the old Bolton Camp in Caledon, now managed by the Toronto Region Conservation Authority. These historic red-western cedar pan-abode cabins had been donated from the TRCA and with reconstruction costs assisted by the Bolton Rotary, were meticulously taken apart and reassembled with floodplain foundations in a secure setting  at Cedar Glen.

Brandon explained that that two more cabins from Bolton Camp are secluded in “The Grove”. As far as future cabins go, vandals started up a bulldozer at the TRCA Bolton Camp and damaged many of the remaining structures. For me, it was a devastating loss since I had worked at both sites, Cedar Glen and Bolton Camp, for decades. The loss of those cabins is a tragedy.

But the good news is that four have survived at YMCA Cedar Glen and along with their main building guest rooms have preserved that western red cedar pan-abode history. In addition to those guest rooms on the main plateau is a smaller conference building building for adult or leadership groups. as well as an “international village ” featuring cabins, tipis and yurts in the lower portion of the property.

Not to be outdone in forward thinKING community services, Cedar Glen is opening up a licensed child care in 2019 with 80 to 90 spaces. From young toddlers to elder toddlers, Cedar Glen has it all covered. A beautiful facility, a spectacular outdoor setting, a plethora of programs, a supportive Township, and an enthusiastic staff. If there was ever a winning formula for success, this is it.

When I last saw Cedar Glen it was a diamond in the rough. Now it is another gemstone in King’s many jeweled crown.

* Note: The TRCA’s Claremont Field Centre in Durham Region is the other site of these circa 1970 western red cedar pan-abode structures.