I was up early on the morning of December 15, 2017. I had gone through my normal routine of brewing a Buffalo Soldier coffee and toasting some Amazing Grains Raisin Bread before turning on the early TV news. 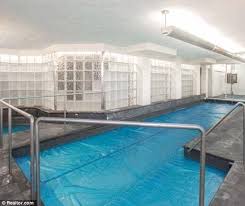 The first image that came up on the screen is burned into my memory. It was a photo of two bodies dressed in white robes, at the edge of a luxurious swimming pool in what appeared to be a Dan Brownesque ritual death.

The bodies were beside each other, almost posed in a surreal state of eerie calm in the midst of their apparent wealth. It turned out the bodies found in a that wealthy Toronto neighbourhood belonged to billionaire couple Barry and Honey Sherman. The theories surrounding their bizarre deaths circulated as quickly as that photo disappeared from the TV screens.

For anyone who saw the photo that day, the immediate reaction was of a ritual murder or suicide pact. It was too posed, too staged. There was a message being sent in the way the bodies were arranged so calmly beside each other in their final rest. There was no blood or gore, no house smashing struggle, no dragging of battered victims across the pool deck. No.

There was only this photo of two bodies symbolically seated beside each other gazing out over their swimming pool as if in final contemplation of their wealth. The initial judgement of the police was that the Shermans had died either in a suicide pact or a murder-suicide.

Enter the Sherman family lawyers, and a private autopsy, Extreme wealth has its privileges. Also, suicide has a deleterious effect on the settlement of estates and insurance policies. Especially when one of the parties wills seems to be missing. After much high profile back and forth, the police declared that the Shermans were murdered, by perpetrator or perpetrators unknown, and still unknown to this day.

Today, two years later, the police will be updating their report on the mysterious Sherman case. One of the missing pieces of the puzzle appears to be that Honey Sherman revised her will only two days before her death. My mind flashes back two years to that photo that is imprinted indelibly in my memory. Maybe I have read too many Dan Brown novels about symbols and ritualistic deaths, but I stand by my first impression. Someone was sending a message. Who?