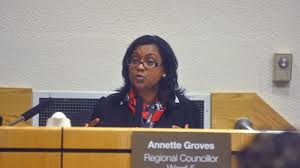 On Thursday, November 26, 2020, Caledon was betrayed by one of its own citizens, one of its own elected representatives. That person was Regional Councillor Annette Groves. And here is how it unfolded.

At the Region of Peel Council meeting that day, Mayor Patrick Brown of Brampton walked a surprise Motion on to the agenda that would remove two out of the five Regional Councillors currently representing the citizens of Caledon at the Region of Peel. The two seats that Caledon lost on Council would go to Brampton. Normal procedural guidelines and debate were suppressed and the Motion passed with the support of the Brampton and Mississauga Mayors and Councillors. The Mayor and Councillors from the Town of Caledon voted against the Motion with one notable exception … Caledon Regional Councillor Annette Groves.

Caledon Mayor Allan Thompson responded immediately with an emergency communication to Caledon citizens: “This surprise motion is unacceptable. Representation on Council is important. This discussion warrants greater respect than a walk-on motion. If there are problems of representation to be addressed, they can’t be at the expense of diminishing Caledon’s voice on Regional Council. We are going to continue to play a bigger role economically for the region and in the Greater Toronto Area. Now more than ever, we need effective representation.”

A Special Live-Streamed Council Meeting was quickly called for November 30, 2020 to address this crisis. Local online news reporting on the reduction of Caledon’s significant reduction of representation at the Region of Peel drew a swift commentary from one Bolton resident:

“This surprise Motion was walked on by Mayor Patrick Brown and supported by Caledon Regional Councillor Annette Groves. It is totally unacceptable for a representative of Caledon to deliberately sabotage our representation at the Region of Peel. If allowed to stand, this act of betrayal will put the growth planning for Caledon at the mercy of Brampton and Mississauga politicians and their influential developer puppeteers.”

Citizens of Caledon should now be calling on their Council representatives to hold Regional Councillor Annette Groves accountable, publicly censure her, and in a recorded vote unanimously condemn her actions.

Regional Councillor Grove’s latest betrayal of Caledon is a confirmation that she is unfit to serve and represent our citizens.

NOTE: The Peel Region meeting from November 25 is currently being streamed online.