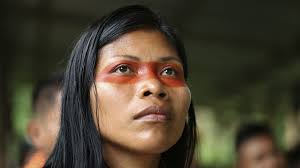 From The Goldman Environmental Foundation:

“The Goldman Environmental Prize is a prize awarded annually to grassroots environmental activists, one from each of the world’s six geographic regions: Africa, Asia, Europe, Islands and Island Nations, North America, and South and Central America. Each year, the Goldman Environmental Prize is honoured to recognize six heroes of the environment. Join us tonight, November 30, 2020, 7:00 pm EST on Facebook, YouTube, or Twitter to meet them and hear their stories firsthand. Hosted by award-winning actress Sigourney Weaver, this virtual award ceremony will feature Robert Redford, Danni Washington, and Lenny Kravitz, as well as musical performances from Jack Johnson and Michael Franti.”

The 2020 prize winners are Kristal Ambrose from the Bahamas, Chibeze Ezekiel from Ghana, Nemonte Nenquimo from Ecuador, Leydy Pech from Mexico, Lucie Pinson from France, and Paul Sein Twa from Myanmar.

I would like to highlight the work of Nemonte Nenquimo for selfish reasons. Thirty years ago I started a global and environmental education initiative called Global Perspectives: the Periwinkle Project, named after the endangered and life-saving rosy periwinkle of Madagascar. For Christmas of that year, instead of buying gifts for each other, my family donated to the Guardians of the Rainforest program to protect endangered jaguar habitat in Central and South America. Flash forward from the headwaters of Mono Cliffs in 1989 to the rainforests of Ecuador in 2020.

“Nemonte Nenquimo was chosen for her success in protecting 500,000 acres of rainforest from oil extraction. She and fellow members of the Waorani indigenous group took the Ecuadorean government to court over its plans to put their territory up for sale. Their 2019 legal victory set a legal precedent for indigenous rights.”

Ms. Nenquimo’s hunting-gathering Waorani culture numbers around 5000 people, They had lived in relative isolation prior to contact with American missionaries in 1958. She recalls listening to her grandfather’s stories of the land and the people before that contact tried to Christianize their culture.

“Historically, the Waorani women have been the ones to make the decisions, the men went to war,” she explained in an interview with Online’s Latin America editor Vanessa Buschschlüter. “Waorani women made the men listen to them and it wasn’t until we had contact with the evangelical missionaries that we were told that God created Adam and that Eve came second and was created from Adam’s rib, that’s when the confusion [about women’s role] started.”

Sound familiar First Nations? The arrival of evangelical missionaries is when the confusion about everything starts. But Ms. Nenquimo decided to reverse history and became the first woman to be chosen as President of the Waorani of Pastaza province in Ecuador. “When it comes to making decisions, the women pull no punches, and everyone listens up”.

The courts in Ecuador certainly listened up because in In April 2019, in a case that would have allowed their lands to be auctioned off, the judges ruled in favour of the Waorani. “The ruling not only protects 500,000 acres from oil extraction but also means that the government will have to ensure free, prior and informed consent before auctioning off any other land in the future.”

Nemonte Nenquimo and her fellow recipients are living proof of environmental literacy in action and inspirational examples to all of us who continue to educate, work, and fight for the health of our planet and all of its magnificent diversity of life.