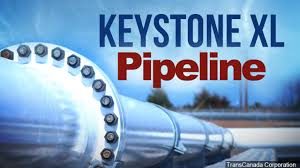 We who are seeking a sustainable energy economy for Canada do not mourn, but the wailing and weeping from Trump wannabe politicians in Canada is deafening, No sooner had Biden cancelled Keystone, than the Republican Conservative horde north of the border, led by O’Toole, Kenney and Ford, took to the airwaves predicting job loss armageddon and the death of the Big Oil corporations.

Let us remember that the Keystone XL Pipeline was NEVER a Canadian dream. It was a business deal cooked up in Calgary between Alberta and Trans Canada Corporation (a private energy company) back in 2008 when Stephen Harper was Prime Minister. Trans Canada Corporation, now known as TC Energy, got it’s Keystone XL Pipeline deal rubber stamped by Harper’s hand-picked corporate National Energy Board.

Fortunately, a marriage made in the deep pits of the tar sands at a time when oil prices were booming high was doomed to failure when the bust came. From environmental studies that showed the potential for disastrous pollution problems to cultural protests over the route selected through the States, Keystone became an investors’ nightmare.

The oily Republican Conservative horde in Canada will no doubt use the cancellation of Keystone XL to attack PM Trudeau. They will blame the Liberals for the loss of non-existent jobs in a  declining and rapidly imploding resource extraction industry whose impending death is as predictable as the demise of the pipeline. Canada needs a sustainable energy sector, not an unsustainable cabal of profiteering fossil fools.

The US just deposed a lying dictator – we don’t need the same kind of leadership in Canada. O’Toole and his provincial partners would be well advised to sit down, educate themselves on the energy needs of the 21st Century, and start planning for jobs and economic security in the new renewable, sustainable energy economy.

1 thought on “The Keystone Cops – Trumpism in Canada”