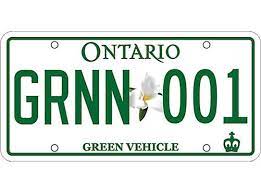 I beheld it reverently, almost with the awe of an innocent child on a mythical Christmas morning. Yes, Virginia, there is a green licence plate in Ontario. And it was attached, front and rear bumpers, to our new “zero emissions” Plug-in Hybrid vehicle. It was just in time to help Canada honour its lofty promises made at the recent COP26 Environment Conference.

Not only does the green Ontario licence plate indicate that your vehicle is clean and quiet, it also entitles you to drive solo in the designated HOV lanes. It also allows you to take advantage of the many green designated parking spaces and charging stations installed and expanding around Ontario. In my community, Katelyn Tozer with the Town of Caledon has been working on creating the infrastructure and resources needed to encourage and expand the use of electric and electric-hybrid vehicles. The planet loves a family with low emissions!

Canada’s lofty goals aside, it was really my neighbours who inspired me to get a “zero emissions” vehicle, Imagine in your neighbourhood, just upwind, is a family of four with six vehicles – four individual use cars and extra “pet” sports cars. One of the sports cars might be a work in progress, kept in their attached garage/mechanics shop where it would be frequently tuned, loudly belching clouds of petrochemical effluent into our  collective airspace.

Even more inspiring would be their habit of clearing their four cars of frost, ice and snow in the winter by leaving them idling for 20 minutes or so until everything melted off. Of course in the summer, the idling would be used to run the air conditioner to cool the cars down, You would try to set a good example by using a new emissions free invention called the combo snow brush and ice scraper on your family’s one vehicle. Or you would demonstrate the benefits of parking in the shade and leaving the windows open a crack in the summer, You would even put up a sign saying “No Idling Zone” to remind them of Caledon’s two minute limit on idling, but it would all be to no avail.

I slowly came to the realization that Canada could never meet our targets with that level of pollution right next door, so my family decided that the only thing we could do to compensate was to reduce our emissions to zero. Thus our decision to purchase the new Plug-in Hybrid vehicle. We had already signed up with Bullfrog Power when we first bought our home, so we knew we had green electricity going into the grid for every kilowatt hour of juice we used when we “filled the tank” so to speak.

We also considered, with gratitude, the roll of the dice that had placed us in a country with the resources and personal circumstances that allow us to make such a choice. Even in Canada, a majority of our population trying to survive under pandemic pressures have to meet other basic needs first before considering the luxury of a green vehicle choice. Perhaps our politicians should make it a priority to create a clean, green public transportation network to benefit all Canadians. How shortsighted it was for the Ontario government and Metrolinx to cancel the planned GO system expansion to Bolton, let alone all of the green programs and vehicle rebates. Bad Dougie!

Here is the challenge for Canada, for the globe. We tend to blame the large corporate fossil fuel industry for our accelerating climate change woes. We also need to address individual citizens and politicians who continue to engage in fossil fool behaviour. Idling your car for twenty minutes to melt off the snow is like a person infected with the coronavirus walking maskless  through a crowded supermarket screaming “FREEDOM” with spittle filled passion. William Wallace would not be impressed.

Educating the corporation, the politician and the individual as to the seriousness of the accelerating climate change emergency is a survival curriculum for the twenty-first century and beyond. Moving through awareness and knowledge to action is the challenge. In order to get people to change their behaviours, my mom used to advise me, “Sometimes you get more with the honey dipper than the fly swatter.”

More recently one of my mentors, Dr. William Fyfe, bemoaning the lack of progress on dealing with the planet’s most serious environmental issues, passionately told me: “Skid, it’s time to stop being polite to stupid people.” Yes indeed, it’s time for both the honey dipper and a really big fly swatter.