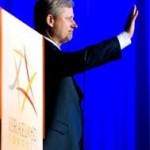 Ah, Stephen, what you won't do to secure the loyalty of certain groups, well, at least the more conservative faction, in our multicultural Canadian society. Just think of the fundraising power, the business influence, the political lobbying power and the voter loyalty that your undying support for Israel will produce. Although your salute is a little too close to being insensitive. Oi vay!

And now, with your triumphant entry into Jerusalem, on your first actual visit to Israel, you and your business delegation will have secured a CRAP future. Although your welcome on the West Bank will undoubtably be cooler, there are not a lot of trade deals to win there, so no biggy. And besides, the way Netanyahu is building settlements, Palestine will disappear in a few years anyway. Displaced peoples are so inconvenient and get downright militant when they try to secure a homeland. I remember stories long ago of another group in the Middle East that tried this after World War 2 – lest we forget. 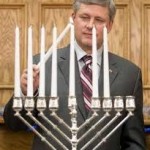 So Stephen, although you may try to hide your true intentions, we can see through the facade and know you are not playing with a full menorah. Your political researchers have served you well on how to maintain power in Canada. Such a macher, such a gonif!

Oi, Canada, we stand on guard for thee.