The recent spate of editorials bemoaning Andrea Horwath's betrayal of most things traditionally NDP has it's roots in a previous ideological betrayal.

Way back in 2005, Jack Layton did the same thing. Jack knew that if Paul Martin's Liberal platform got majority impetus, the federal NDP would have no campaign. And so he signed his deal with the devils, Giseppe and Harper, and killed Kelowna, Kyoto, and National Child Care. The end game in that betrayal of NDP principles was to ensure the survival of the federal NDP. The result of that is the one term Opposition status that Mulcair currently enjoys and will lose in 2015. 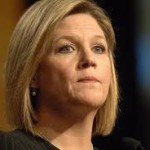 Similarly, with an NDP wish list budget on the table, Horwath saw the writing on the wall for the NDP. If that budget passed, there would few scraps left on the table for the left of centre to champion. And so, she betrayed the principles of the party to try to ensure their survival. It has backfired badly. Traditional NDP loyalists like Stephen Lewis,  Michelle Landsberg and Gerry Caplan have publically admonished the shift to the right and the defeat of the "most progressive budget in recent Ontario history."

Citing distrust of the Liberal government over the gas plant cancellations, Horwath protested that she could not trust the current government. it is important to remember that all the parties wanted the gas plants cancelled. The NDP's concern was that it was being done for political, not environmental reasons. Just like not supporting the Liberal budget was done for political, not social justice, environmental, or sustainable economy reasons.

The will be another Orange Crush in this provincial election, Andrea, but not the one for which you hoped. The Ontario electorate has seen what the federal NDP betrayal of principles has done for Stephen Harper, and they certainly don't want that opportunity given to Tim Hudak and a return to the dark days of the ReformaTories and the Harris regime policies.

You should have supported the budget, Ms. Horwath. That way you would have remained the Honourable Third Party. No longer.