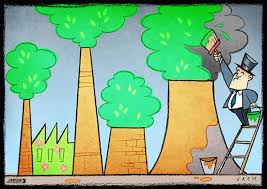 On March 15, 2018 the government of Canada declared that it was going to dedicate $500 million to projects aimed at reducing greenhouse gases. Brilliant. The year is 2018. It is thirty years since the alarm was sounded in Toronto by the World Meteorological Society. In this case, better late than never doesn’t quite cut it.

But, if there is any good day to celebrate Canada’s Greenwashing, it surely is on St. Patrick’s Day. I’m sure most of our politicians are kissing the blarney stone right now.

It is making me gag to hear our government offer $500 million to explore solutions that were proposed thirty years ago. It’s like gun violence – the solution is easy. Control the guns! You want to significantly reduce greenhouse gases? Then shut down the industries that produce excessive greenhouse gases and don’t approve projects like Trans Mountain Pipeline that encourage more fossil fuel use! You want to stop violence against women? Expose and #MeToo the heck out of stupid, abusive men!

This is the KISS principle, consensual of course, for environmental literacy.

Your community wants clean water? Don’t dump toxic chemicals or sewage into the watershed. I’m sure Grassy Narrows would have appreciated that private corporation requirement with stringent government oversight and enforcement instead of a lazy blind eye.. Don’t reward people with a $500 million taxpayer bailout when they are so environmentally illiterate that they don’t  realize it’s not a good idea to defecate in the community well. “Doctor, it hurts when I do this.” “Well then, stop doing that!”

Canada stands tall on the world stage, represented by wonderful and well-meaning people, lauded in the myth of our green environmental standing by dint of our tiny global population. But per capita, we are major players in contributing to greenhouse gas emissions.

This is not my opinion alone. Try this from a November 2017 news report by Bob Weber of the Canadian Press for CBC:

“To an international diplomat, the irony is painful — the country that promised action on climate change is falling behind while the country that has spurned a major treaty on the issue is making progress.

That’s Canada and the United States, Angel Gurria, secretary-general of the Organization for Economic Co-operation and Development, said Wednesday.

“It’s a bit of a paradox, here,” Gurria told The Canadian Press. “In Canada, you have a situation where you have a very strong political will to reduce, but effectively it has not gone on the planned road.

Gurria has high praise for Prime Minister Justin Trudeau and his Liberal government’s strong vocal support for climate change. Gurria said Trudeau made a real contribution to reaching the Paris deal in 2015 in which 169 countries promised to reduce their emissions enough to keep global warming under two degrees Celsius.

But when the signatories get together next year to take a look at each other’s progress, Canada may not be so much in evidence.

“While at the same time, the local situation is showing that speed of reduction is not as fast as one would have wanted.”

Yes, Bob. Yes, Canada. Yes, Catherine. Not what we wanted by March 2018. And not worth $500 million to start now. The train has already left the station. Either shut down the big emitters or stop proselytizing. Our children are the first recognize a greenwash and. like the students in Parkland, they want action, not a greenwash stuck in the spin cycle.