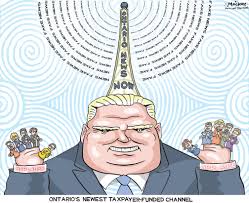 In 2018, Doug Ford, candidate for the leadership of the Progressive Conservative party of Ontario, blocked the mainstream media from his campaign tour and instead co-opted Lyndsey Vanstone, reporter turned staffer,  to be his “media spokesperson” for “public events” that were privately recorded and staged. Enter Ontario News Now!

Lyndsey moved up quickly through the Doug Ford dynasty beginning in June of 2018. In less than six months she rose from being his Press Secretary, to his Executive Assistant, to the Deputy Director of Communications for the Progressive Conservative Party of Ontario. Impressive! Granted that Lyndsey has a legitimate broadcasting certificate from Seneca College and has a personable and articulate onscreen presence, which makes “Ontario News Now” seem like a legitimate news outlet.

It is a propaganda tool, pure and simple, for Doug Ford and the “Progressive” Conservative Party of Ontario. Much like Fox News and Breitbart works for Trump, so does the Toronto Sun and “Ontario News Now” unabashedly support the right, some would say far right, of the political spectrum. And while the Sun is classified as legitimate, lower grade reading level media, “Ontario News Now” is not legitimate news in any way.

“Ontario News Now” is the private tool of a political party with a populist political boss. It is to legitimate news broadcasting what the now defunct and disgraced “Caledon Perspectives” was to legitimate community newspapers – in that case, the marketing ploy of a development corporation that sought to intimidate and misinform the citizens of Caledon. That propaganda newspaper is gone, but the damage remains with the wool still pulled over the eyes of a segment of our tribalized community. The only difference between these two media manipulations was that one was paid for by a private corporation. the other is paid for by the taxpayers of the province.

“Ontario News Now” will probably be with us for the next four years. Let’s hope that the provinces’ citizens become more media literate and can learn to separate the wheat from the chaff.

Here’s a good sensory image to help us . Every time an “Ontario News Now” broadcast or Tweet comes across your phone, imagine that you have just stepped in an unwanted warm pile of poop that a neighbour’s pet left on your lawn. It’s what my olfactory nerves pick up every time I see Doug Ford on the screen intoning, “My friends…”

The way I smell it.

2 thoughts on “Ontario News Now … IS NOT”