Once upon a time there was a continent …. Yes, a supercontinent called Pangea. About 175 million years ago it split apart. Fast forward 174 million years and a bipedal creature moves out of Africa to invade Asia and Europe. From that point move forward to 15,000 years ago when Siberian mammoth hunters, Japanese sea otter fishermen, and Polynesian refugees arrive on the west coast of North America to become the First Peoples. The First Peoples hunt to extinction many of the native species.

Now move forward to the last 1000 years or so as the first European invasive immigrants meet the now indigenous peoples of North and South America. And history, as they say, repeats itself. These European colonists bring with them many new invasives like the smallpox virus, the dandelion, the robin, and the honeybee. The honeybee hives are popular with the colonists, and so common in settlements that the First Peoples refer to them as “white man’s flies.” The honeybee (Apis mellifera) settles down and becomes so much a part of white colonial agriculture that we begin to think of them as a native species. They are not.

There are over 4000 species of bees in North America, including over 50 species of the humble aerodynamically challenged bumble bee. It is one of our best pollinators of native species. The invasive western honeybee, on the other hand, is not. It is, however, a very successful pollinator of cultivated crops. Which is why corporate agribusiness rang the alarm bells when another invasive species arrived.

In 2011 a massive tsunami devastated Japan, and Pacific Ocean currents began to carry the debris toward the west coast of North America. By 2012 and for years since, that debris and the floating rafts of biota that came with it have been washing up on the shores of Vancouver Island. A few years later, the Asian Giant Hornet (Vespa mandarinia) is discovered in Nanaimo, B.C.. In early 2020, Washington State, U.S.A. sounded the alarm over the arrival of the “Murder Hornets” crossing the border from British Columbia, Canada. 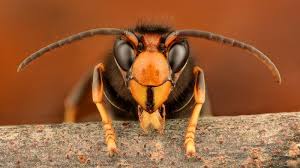 The Asian Giant Hornet, also known as the Japanese Giant Hornet is native to South East Asia, Japan, and Eastern Russia. They prefer to nest in hollow logs or at the base of large trees which makes Vancouver Island ideal habitat. Besides the rather potent venom from its 6mm (¼ inch) stinger, it loves to decapitate honeybees. Its mandibles are bigger, armour stronger, venom more powerful, and they fly at 40 km/h, so a few Asian Hornet predators can devastate a European honeybee colony very quickly. Sort of like an insect reversal of history.

It reminds us that change is the only constant, and that anytime a species with a predatory advantage invades, the pecking order changes. And while the newly invasive vespid may prove problematic to the previously invasive honeybee population, it is a boon to the script writers of sensational news. The Fox Frenzy and Sun Sensational teams have already dubbed it the “Murder Hornet” much like the “Killer Bees” from Africa via South America and Mexico a few years ago. However, the hornets do not kill “over 50 people a year” as erroneously reported in the NY Times.

There was a highly publicized incident in 2013 in Shaanxi, China when stings by Asian Giant Hornets killed 41 people and injured more than 1,600. But while envenomation from the sting can cause cardiac arrest, anaphylactic shock, and kidney failure, humans are not their preferred prey. Honeybees on the other hand, are not so lucky. These new immigrants and enemies of the state of inertia will no doubt cause a shift in the balance of our “natural” systems.

The one advantage that honeybees have over the earlier example of colonial invasive species domination is that honeybees have become such important pollinators of cultivated crops that they have an economic value. Native Maple syrup is worth $500 million to the Canadian economy. By comparison, honey related jobs and products add $900 million to the American economy, and invasive honeybee pollination is valued at over $20 billion to American agribusiness. 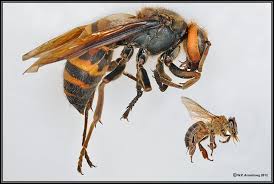 Follow the money in this battle of the invasives. The Asian Giant Hornets may have better natural equipment, but the European honeybee has some sweet investors. In the meantime, just to be safe, don’t kick open any big old hollow logs or stumps. No “murder hornets” in Ontario yet, but you may be disturbing the nests of our native bumblebees. And our native species need all the help they can get.

1 thought on “Battle of the Invasives”