November 5 in England is celebrated as Guy Fawkes Day, a day of masked protest against oppressive neo-facist governments. Although the mask most of us are familiar with these days is designed to prevent the spread of COVID-19, the Guy Fawkes mask is particularly fitting on this November 5 when the premature results of the American election will be announced. This mask may help prevent the spread of the STUPID-45 virus. 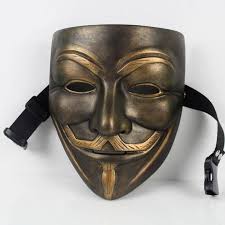 The mask was made famous in recent cinematic history by the anarchist hero of “V for Vendetta” in a stark black and white rendition. William Rookwood could be an allegorical figure representing every protester from Portland to Caledonia to Lagos to Minsk to Hong Kong. Unlike V in his farewell bed of roses on an explosives laden train, the historical Guy Fawkes was captured before he could blow up the Parliament Buildings. He was tried and sentenced to be hung, drawn and quartered. While climbing up the hanging ladder, he jumped off and broke his neck, dying instantly in a final act of protest.

It would be fitting if the results of the US election were announced today and a victory declared against an oppressive, neo-facist President. Most of us are already masked in preparation – just don’t go climbing any ladders. We need all the anti-facist, pro-democracy voices we can find. From the results south of our border, it looks like half the population is unfortunately unmasked and infected. It will take a lot of work to unite these divided States of America.

Don’t worry though, because Joe has no intention of blowing up anything. He and Dr. Jill will just have to really, really thoroughly disinfect and wear masks until all the viruses are cleaned out of The People’s House. And then replant Michelle’s garden!

Until then it looks like at least one more week of  “sunny days” here in Canada, home of the trees, and land of the waves from coast to coast to coast.