The Witch is dead.  Or at least in his death throes. It’s 5:00 am on Saturday morning November 7, 2020 and I’m calling the election. The 46th President of the United States of America is Joseph Robinette Biden Jr. 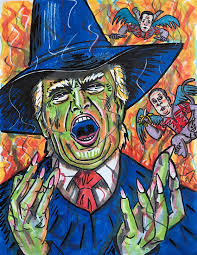 Writhing in impotent anger as the flames flicker out beneath his cauldron, Donald John Trump will be dragged kicking and screaming from the Peoples House. He has already declared that there will be no concession speech and that his illegal team is ready to sue any and all who dare to imply that he is a loser in this 2020 American Presidential election cycle. But lose he did, with both the popular vote and an Electoral College majority going to Sleepy Joe. Didn’t see that one coming did you, Mr. Impeached President?

The dust has yet to settle on the remaining vote count, and it is never over until the obese turtle shrivels, but it appears as if the remaining states of Arizona, Georgia, Nevada and Pennsylvania are all going to Biden which will carry him well over the 270 Electoral College votes needed for declaring a Presidential victory.

And that lack of concession speech? Turns out it’s a courtesy, something else of which DJT was incapable, like being a President. When the votes are all counted, the next President of the United States of America will be sworn in on Inauguration Day, Wednesday, January 20, 2021 whether the former president concedes or not.

We should know officially by the end of the weekend, but I’m calling it now. The witch hunt is over, The witch is dead. Time to replant Michelle’s Garden. The way I see it.