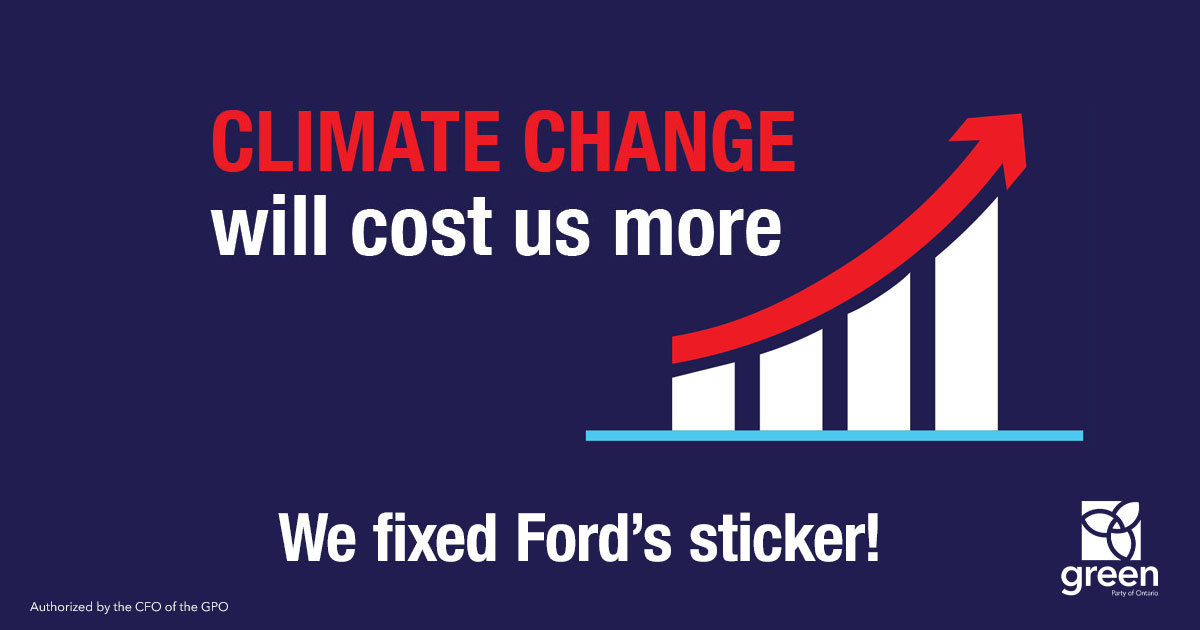 Enter the Green Party of Ontario with their own gas pump stickers that tell the truth: CLIMATE CHANGE will cost us more! Thank you Mike Schreiner. These magnets, as illustrated in the lead image, can be ordered from the Party’s website. I wish they also had flags we could fly from our cars, and lawn signs we could place in front of every gas station, and billboards that would clear the smog of Boss Ford regime’s polluting propaganda.

Our taxpayer dollars are being used against us by this government. Every TV ad we see, every broadcast we hear, every Ontario News Not sham reality TV fake breaking news special is another pile of El-Toro-Pooh Pooh from Dougie’s dumbing us down team. It is time to say a loud and passionate NO to big and powerful and environmentally illiterate politicians! Get your BS off our gas pumps!

Let our MPPs know that this is a violation of our intelligence, of our energy that should be going into mitigation efforts, of the health of our children, and of the biodiversity of our ecosystems. Doug Ford is driving the Ontario bus into the future at high speed looking in the pre-paleolithic rear view mirror. And any supporter of the Regressive Conservative Party who is supporting him is complicit.

So, all of you good, hopefully thoughtful and intelligent people who are Ontario Conservative Party members, as scientist Bill Nye said on John Oliver’s Last Week Tonight Show recently:

“Grow the f–k up. You’re not children anymore. I didn’t mind explaining photosynthesis to you when you were 12. But you’re adults now.”

Ah, and of course, adults who are right wing conservative politicians always act in the best interests of their local and global communities, right? No. They only do the right thing if their communities demand that they do so, and if they don’t it is time for a ride out of town on a rail and covered in tar sand oil and feathers.

If you are an Ontario Conservative supporter at this point in 2019, you are for deregulation and cutting red tape solely for the economic benefit of wealthy developers and corporations AND you are against social justice, environmental security, public education, and sustainable development. In my riding of Dufferin-Caledon, Sylvia Jones is the Conservative MPP. She does not speak for me and I regard her as an enemy of the people as long as she sycophantically claps for every Doug Ford pronouncement.

“We’re mad as hell, and we’re not going to take it anymore!”

*image from the Green Party of Ontario