I first wrote this post several years ago in reponse to a Ducks Unlimited challenge. The furor created over Walter James Palmer’s poaching of Cecil the Lion motivated me to republish it here: Nothing has changed. 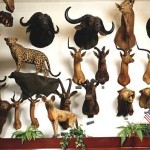 After a recent post, I was asked if I were anti-hunting, and my answer was a clear, “NO.” I will ensure that my soon-to-be teenager is skilled in marksmanship with both gun and bow and arrow, and knows how to fish with rod and net. I will ensure that hunter safety trainlng is part of his curriculum for the twenty-first century. I will teach him that if he ever needs to take the life of an animal for food, that he will do it quickly, skillfully and respectfully. But under no circumstances do I support trophy hunting. Big boys with big guns and bigger egos.

For over a million years the hominids that eventually came to be known as homo sapiens were hunter gatherers, so you could safely say that there are some pretty basic skills hard wired into our DNA. The agricultural aspects of our existence didn’t apppear until about 10,000 years ago after the last Ice Age had significantly melted back to the poles.

in what we know of our human history, generally women and children were small game hunters and gatherers of every seed, nut, fruit, and edible leaf that they could find. They basically kept the community alive – not much has changed for women. The men appear to have been the chest pounders and the hunters of larger prey. Given our primate chain of development, protein was a highly valued resource and we worked hard to get it. We became so good at it that post ice age hunters crossing from northern Asia into North America are thought to have been partially responsible for the extinction of several large ungulates.

The toys that children were given in those days were toys that would teach them basic hunting skills through play – the wooden spear, the sling shot, the small bow and arrow, the knife. In those days you had to get pretty close to your prey to kill it. You had to know the habits and habitat of that animal thoroughly. You had to know where the heart and lungs pumped so your shot would make a clean kill. You and the animals knew each other very well. Consider the skill necessary to get within 10m of a deer for a clean shot with bow and arrow. Some of my greatest outdoor nature skills were learned from real hunters and trappers who had an absolutely intimate knowledge and respect for their environment, and only ever took what they needed off the land and water.

I still remember receiving my first rifle from my father, one I used very effectively to clear an infestation of groundhogs from a cattle field on his farm near Cobourg – my dad taught me how to skin and clean them – my first real lessons in anatomy and how to avoid those nasty scent glands that could spoil your stew. (I learned later that the groundhogs not only had seniority, but an invaluable role in the food chain and energy cycle – I stopped hunting them). I still remember my first fishing rod and “the big trip” every spring to Inverlochy Lodge with “the men” to fish for the  mighty northern pike. Everything we caught, we ate. Nothing got stuffed and mounted.

I hunt with a computer now, feeding my family with a whole different set of skills. But when the machine breaks down, and I need to feed my family from the land and water once again, I know exactly how to do it skillfully and respectfully.

On a trip with my students to the North West Territories several years ago, we were out on the tundra with our Inuit hosts, preparing the tradional snack of tea and pilot biscuits, when one of the hunters jumped on his snowmobile and headed over a ridge. We heard the sharp crack of a fifle shot, and he was back in minutes with a caribou slung over his komatiq. He knelt by the caribou’s head for a moment saying something in Inuktituk, then skillfully removed the skin, rolled it up and put it on the sled, butchered the caribou on the spot, and we had lunch – abolutely one of the best teaching moments of my long career. My big city students for the first time saw that direct connection to the land and their food source. They learned later that the hunter had whispered a thank you to the caribou for presenting itself so that the hunter could feed us, his family.

But trophy hunters, that’s a whole different class of human. So called sport hunting is a huge global industry – just check out all the things you can buy at Pro Bass. But using a laser guided scope and a high powered rifle to kill an animal 300 m away, remove only the head for a wall trophy, and call it sport is ludicrous in the extreme and deserves a good Gary Larson cartoon. End of discussion.