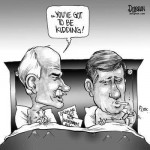 Very few people realize that the reason we have Stephen Harper and his Conservative Reform Alliance Party in power is because of Jack Layton and a deal with the devils that has haunted Canada for the past seven years.

END_OF_DOCUMENT_TOKEN_TO_BE_REPLACED

After a summer of traveling north of Superior and visiting my eldest son in South Korea, I returned home to Canada to find that, in the face of increasing opposition, Prime Sinister Stephen Harper had quietly proclaimed that "science" would determine the fate of the Northern Gateway Pipeline. 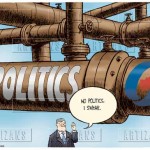 I wondered for a moment if I had missed a convergence of heavenly bodies and the dawning of a new age. Alas, it turned out to be merely more political greenwash on a done deal. You see, the only science that Mr. Harper has applied to any environmental issue has been the "science" of economics.From the early days when he first took office and shut down the One Tonne Challenge and the Environment Canada website so it could be rewritten in his image, to the current lobbying he is doing on behalf of the oil and gas industry, Stephen has consistently ignored any science other than economics. END_OF_DOCUMENT_TOKEN_TO_BE_REPLACED